When people decide to relocate, there are lots of different factors to consider before they finally choose a neighborhood to live in. For many, New York City is one of the top destinations for relocation. However, living in such a big city means living among people that come from all walks of life. If you decide to move here either by yourself or with your family, safety is certainly among your top priorities. Even when choosing your extra space storage NYC, you wish to know that your belongings will be safe in this area. With such a dense population, diverse cultures, and differences, it is not always easy to distinguish between safe areas. Luckily, the safety standards in New York changed in the past recent years. Therefore, read this article and discover some of the safest neighborhoods to live in New York City.

Triangle Below Canal or Tribeca

Once this neighborhood was an industrial area before it became a residential hub for many New Yorkers. This is also home to some celebrities such as Robert De Niro and Beyonce. Although decades ago New York was not one of the safest cities to live in, recently the situation changed. When it comes to Tribeca, the NYPD is constantly in the streets making sure to discourage any form of crime and violence. In this neighborhood, you can rent a motorcycle storage NYC and be sure that your belongings will be safe. According to records from the last two decades, the crime rate diminished by up to 87% in this area. In addition, this is one of the most expensive neighborhoods in Manhattan. Due to the low crime rate the costs of living are correspondingly high.

This mostly residential neighborhood is in southern Manhattan between Hudson River & West Street. One of the most popular parks, Battery Park is in its neighborhood. Just like in the rest of Manhattan, security is the top priority in this neighborhood. The police and safeguards are constantly on the streets of this area preventing any crime to happen. In comparison to the national average, the crime rate dropped by about 55%. This is an area convenient for raising children. There is the Museum of Jewish Heritage, public parks, and plenty of outdoor activities.

Also known as Brooklyn Village, this neighborhood has been there since 1834 with its historical buildings and low-rise architecture. It has a population of around 21,000 residents and is an example of an ideal suburb with cobblestone sidewalks and tree-lined streets. In addition, there is a mixture of community and commercial businesses. If you need safe storage space, self storage first month free is available here. Like in other neighborhoods in the city, there is also a great focus on lowering the crime rate. For this reason, the 84th Precinct is constantly patrolling the streets. There have been 22 crimes per 1000 residents in the recent year. The area got the rank as below average crime rate, as one of the lowest crime rates one neighborhood can receive.

This neighborhood is in the western part of Queens. This residential area is pretty cool and definitely one of the places to consider for living. People are very friendly and you will feel at home here. This is also a commercial area with rich nightlife, green spaces near the waterfront, and plenty of contemporary art galleries and museums. The crime rate decreased by 80% in the past two decades. This is a great indicator that the 108th precinct of the NYPD is constantly working on crime reduction. Apart from being safe, the neighborhood has a variety of housing options. You can find here plenty of apartments, condos, and single-family residences.

On the east side of Manhattan, there is the neighborhood of Murray Hill, with around 12,000 residents. The history of this neighborhood changed in the 20th century to an upscale one. This also led to a reduction in crime in the past century. Today this is one of the safest neighborhoods to live in in New York City. You can find here everything from storage companies that pick up to Beaux-Arts mansions, museums, and the Scandinavia House. The crime rate was reduced by 81% and for example, in 2022 there were only 1,020 crimes reported in this area. Now this neighborhood has the lowest crime rate classification.

These two residential areas in the northwest Bronx have around 13,000 residents. These are two of the most popular residential neighborhoods of Bronx with the pre-war mansions. Apart from lots of greenery and parks, storage units Bronx NY is also available for renting here. The 50th Precinct is patrolling this area and thanks to that there were only 10,1 crimes per 1000 residents reported in the past year. One of the best parts is that this is not only one of the safest areas in New York but also among the most affordable ones. In the past two years, the overall crime rate decreased by 35%.

Kips Bay is among the safest neighborhoods in the city

Located on the east side of the island, this is a neighborhood in Midtown Manhattan. This is a very family-friendly residential area with quite a few attractions. Some famous medical institutions such as NYU found their home here. In addition, the New York Public Library, Curry Hill, and Kips Bay Plaza are just some of the places that you can visit. Kips Bay has The 13th Precinct which provides safety to its residents. In the last year, there were 22 crimes per 1000.

For the majority of people, safety is one of the most important factors when choosing a place to live. Luckily, there are plenty of the safest neighborhoods to live in New York City. Therefore, start your research today and soon you will find a perfect and safe neighborhood for you and your family.

“ They were AWESOME! We used them for a move from 1 Location to 2 different ones. Couldn’t be Happier the dealt with freezing weather icy driveway and never complained once. Highly recommend. Thank You! ”

Contact NYC Mini Storage via phone/email to get a free storage estimate or reserve a storage room NYC of your choosing.

Arrange for Pick Up

Let one of the best storage companies NYC provide you with a moving truck and a driver for 3 hours - FREE of charge.

Relax knowing that your valuables are kept safe in our clean & climate controlled storage NYC facility. 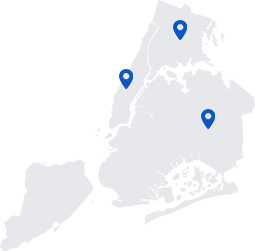